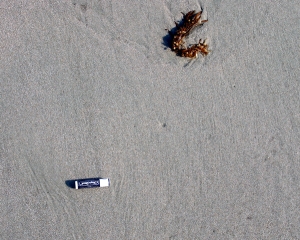 I was sitting on the Duke quad quite a few years ago when a guy in a black trench coat walked up and sat down beside me. I recognized him from my Philosophy class, but we had never spoken and I didn’t know his name. He asked me out. I looked at him and wondered what he, a physics student, could possibly see as common ground with me, a stranger majoring in English and Comparative Religion who hadn’t entered a science classroom in the past six years, and then only to fill a requirement. I considered Physics to be the most boring and foreign-to-my-life topic on earth. I reluctantly said okay, but we didn’t connect. I never saw him again and learned nothing about physics during our only evening together. It was my loss.

The recent discoveries in Physics are mind-bogglingly fascinating, and the rest of science is hurtling right along. These days I’m thinking about thought — what the heck is it? I’m not alone in my wondering and not alone in my not-knowing, but my sub-atomic-sized glimmers are nagging at me enough to serve as a topic of conversation on the beach.

There are those who claim evidence that thought has mass — the implication then being that collective thought may have gravity, thus attracting like thoughts into a potentially powerful pool.

I was in college when Mahareeshi Mahesh Yogi’s Transcendental Meditation movement peaked.  Oddities, billionaire status and controversies aside, the man grabbed me by the imagination when he put forth the idea that the collective power of mass meditation could transform our world. If thought indeed has mass, then this is a distinct possibility in a prepared and receptive community. Does thought alone have the potential to bring peace?

There are, of course, conflicting opinions on the thought-as-matter theory. More believe that thoughts are an electro-chemical-magnetic-something activity, fleeting, and devoid of mass. Devoid of mass seems easier to swallow; fleeting I can vouch for. And yet it’s clear that in certain instances, the thoughts initiated by distinct brains do overlap, trigger, manifest, or match. How is this so, and what does it mean?

My time at the beach has put me in a  rare circumstance: relaxed, free from responsibility, in an inspirational environment and in the company of those close to me both emotionally and genetically. My mind, in essence, has been free to travel a much broader path, and my brain, unimpeded by immediate responsibilities, has been free to note a wider range of circumstances. The result, noted below in A Very Unusual Day, has been a whole lotta twofers and even a few think-it/see-it whoa moments.

To add a couple more — not earth-shattering but certainly cool: 1) This afternoon a Facebook friend in Connecticut posted the following status: “craving chinese food and a lemon drop martini.” Exactly four minutes later, a Charlotte friend posted “Egg Drop Soup..Hot N Spicy Soup..2 Egg Rolls..2 fortune cookies…& A Movie…” These two updates appeared one above the other on my Blackberry, which showed a total of only 10 posts. These two women are not Facebook Friends — but they both got a whiff of the Chinese wave at the same time, AND they both felt compelled to mention it. 2) Two days ago I asked my sister-in-law if she had any Chapstick. She didn’t. Late this afternoon I was sitting on the beach watching the surf with Vernon and my brother Micheal, and you’ll think I’m a lying freak when I tell you what rolled out of the water in front of us. A damn tube of Chapstick. I jumped up and took a photo of it as much to prove it to myself as anything. A few minutes later a man walked up laughing and asked if I wanted it — said it had fallen out of his pocket while he was playing around in the water.

And here’s the most mind-blowing moment of the last two weeks. After a good conversation on the nature and power of thought, Vernon fell into his favorite mind-broadening game: “What card am I thinking of?” My brother named the first one right off the bat; after that we did so-so. And then my sister-in-law walked out and sat down, and Vernon asked her to think of a card while the three of us, primed from five minutes of practice, concentrated in an effort to visualize the card she held in her mind. Turns out it was a red 7, and we all missed it. We all missed it because my husband was thinking of a black King, and my brother was thinking of . . . a black King . . . and I . . . was thinking of a black King.

A great story, but so what? The truth is, I don’t know if it matters at all. If we brush these events off as mere coincidence, we haven’t lost much. On the other hand, whether thoughts have a measurable mass and a measurable attractable gravity, or whether they’re merely electrical pulses that that create a field somewhere between your mind and mine that may be accessible to both of us and perhaps additionally to a stranger in Taiwan, there’s something more than coincidence going on here, and I want in. Because the reality of thought is this: Whether or not we understand how it works, thought not only exists, but it crosses believable boundaries with irrefutable regularity.

Bags packed, cars loaded, Vernon waiting for me in the driveway, Micheal locking the door to the house, a woman walks past us toward the beach path. She’s wearing a blue batik sarong, and I have one just like it. But . . . I didn’t wear it this trip . . . where was it? I know I brought it, but I don’t think I packed it last night  . . . . I run upstairs and look again in the dresser and find a stack of clothes that I somehow overlooked, run back down and toss them in the car, and yes, the blue batik sarong is among them. Unlike the big moments, I don’t think this one was a message from the universe. I think it was my subconscious pointing my eye toward a signpost to trigger my conscious mind to get back upstairs. But you know, this thrills me just as much.

I believe science will eventually uncover the nature of thought, but I’m okay not knowing for a while longer. In the end, whatever thoughts are and however thoughts work, experiences over a lifetime show me again and again that we find what we seek. Our experiences — our lives —  mirror our thoughts. I need to slow down, open my eyes, open my mind, watch, and be awed. And then I need to act.

On our last night, the sky was just as it had been for the entire two weeks — absolutely moonless and black as pitch. We were able to stay up for the moonrise at 11:36 PM one night soon after we arrived, but as the time crept forward each night, we ditched the effort and learned to love the blackness, the invisibility of sea and sky, and the nearness of a sense of mystery. It’s been a good exercise.

5 thoughts on “The Power of Thought”